A novel that captures the glancing intersections of a loose group of artists and lawyers, restaurateurs, philosophers, wine-makers, and boxers.

Having dinner at the Triennale, Massimiliano is cooking Pho. He bought the ingredients a few days ago on his way back from Vietnam. The building was built in 1933, Malou went there as a child with Jacqueline, the fascist architecture and the name Triennale remained. A building named “every three years.” Massimiliano was born on December 6th, the same day as Malou…—from Vzszhhzz

Composed between destinations, in airplanes, trains, museums, and bars over three years, Jeanne Graff's Vzszhhzz captures the slight intersections of a loose group of artists and lawyers, restauranteurs, philosophers, wine-makers and boxers whose lives are conducted almost entirely in a second language. A loose chronicle masquerading as a novel, Vszhhzz—like Michèle Bernstein's All The King's Horses, the Bernadette Corporation's Reena Spaulings, and Natasha Stagg's Surveys—couches Graff's sharp observations in a laconic and ambient style. By not saying too much, Vzszhhzz says everything about the relation to time, cities, weather and smog that has become the lingua franca of a creative and transient life.

"There's an art of writing amidst the energies and languages of others, and Graff's ear for existential specificity finds momentum in even the most glancing encounters. Always on the move, Graff's phototropic texts incline toward human heat, hallucinating characters upon contact."—John Kelsey 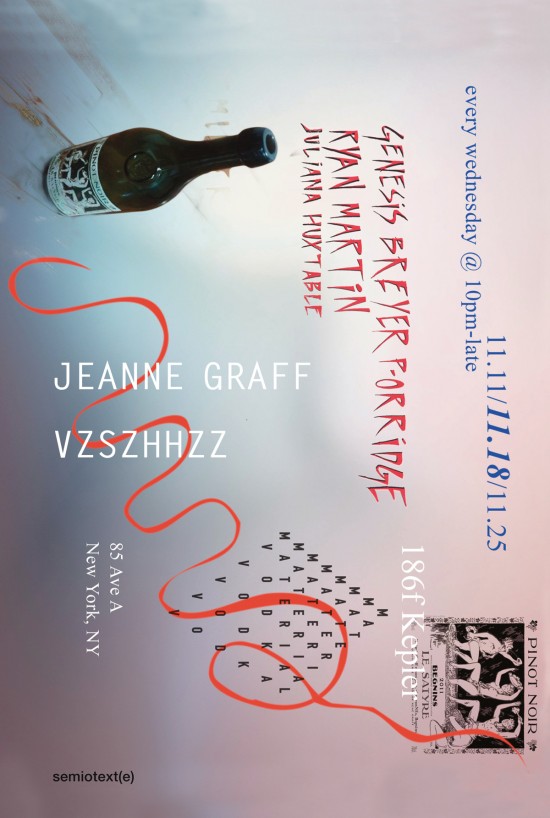