“I wanted to write a novel that went against conventions, against the traditional coming-of-age coming-out narrative. This required me to invent this character Edgar, who is being bullied for being gay. But I also didn’t want to create a victim character. He didn’t have a closet, you know? So what I did in the end was I created my own version of Lolita. So Nabakov has his Lolita; I have my Edgar. […] I wrote it to get out of grad school. It was my creative master’s thesis. Now, when I was writing it, of course, the idea of an audience, the idea of even being published was not part of the pressure. And I wrote it with no rules because I wanted to experience and also to explore the world of the novel as a collage. I was, after all, writing about a community. So the success of Rolling, is still a surprise to me until now.”
— R. Zamora Linmark in conversation with Michel Martin on NPR, 29th May 2016.

When R. Zamora Linmark’s Rolling the R’s was first published in 1995, it ushered a stunning new voice into American literature. In midst of the culture wars, when the prevailing immigrant narrative portrayed success against the odds, Rolling the R’s talked about queer, working class kids dreaming of pop stardom, fighting to imagine a place for themselves in an unforgiving world. Born of radical possibility, there is no novel like it today.

Set in the 1970s in the small town of Kalihi, Honolulu, Rolling the R’s animates the hilarious, disturbing, and chaotic misadventures of a group of Filipino, Vietnamese, Okinawan, and haole fifth graders. As they grapple with their burgeoning identities against a backdrop of Donna Summer’s disco anthems, Farrah Fawcett mania, Scott Baio dreams, their stories unfold largely in the documentary detritus of their lives—their poems and prayers, book reports, and teacher evaluations—all written in carefully observed, pitch-perfect vernacular.

Linmark’s experiments in narrative structure, pidgin, and poly-vocal storytelling sheds new light on the trauma of assimilation. Rolling the R’s challenges the conventions of “coming of age” and “coming out” narratives to reveal spiraling levels of desire in humorous yet haunting portrayals that are, as Eve Sedgewick described, “Daring and delicate… created out of the necessities of queer self-formation in an atmosphere of violence and dispossession.”

This special twentieth anniversary edition features an updated cover and a new afterword by the author, which reveals the genesis of one of the most original and iconic novels of the Asian diasporic experience to its next generation of readers. [publisher’s note] 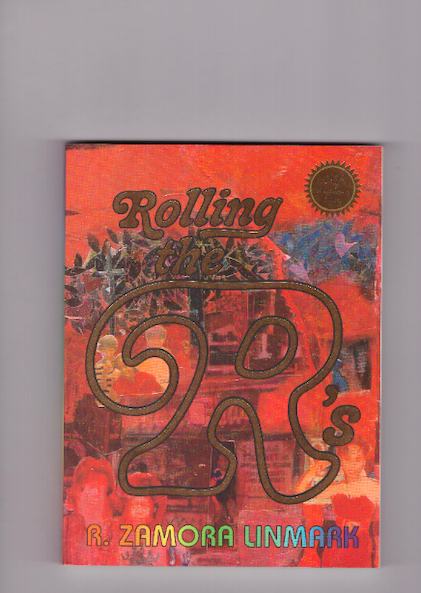