*Second print run available!*
Elke is a young academic with a troubled past that keeps spilling onto her present. Just as she is about to leave town for a writing retreat, she meets Pisti, a charismatic, hard-boiled but luscious Hungarian left activist, who runs an anarchist collective in Paris. Over one night in a Belleville apartment, old friends and new lovers discuss–and act–polyamory, politics, and the art of conversation.
A wry exploration of the seductive allure of tropes and cliché in the art world and politics, Pisti is also an experiment in writing, shamelessly flirting with namedropping and appropriation. The character of Pisti was appropriated from Chris Kraus’ novel Torpor.

Pisti and it's blasphemy against the left and art world is not apostasy, but rather a stepping away from a teleological view of politics and instead, a radical reimagining of the role of incompatibilities, partial identities, cliché and perhaps ultimately, the unresolvedness of hypocrisy.   Which is to say, not taking things too seriously, in order to take them seriously.   Estelle Hoy

“Estelle Hoy's brilliant novel is a deja vu.....similar to Jean-Jacques Schul’s novel Dusty Rose, a story of the 60s composed entirely of phrases that he lifted from magazine copy; a bricolage of cultural detritus. Whole phrases are lifted from other texts and woven seamlessly into the narrative. Which is to say, Hoy’s book is completely original.” —Chris Kraus, author of I Love Dick, Torpor, Los Angeles


“This book is zany and provocative and really makes you feel like you’re in the mix with a bunch of queer Parisian anarcho-hipsters, downing lemon hummus and radishes, oysters and anchovies, and plotting to overthrow capitalism.” —Lauren Elkin, writer, London

“It is about time that someone want to pick up Michelle Bernstein’s habit of writing thinly veiled marxist horoscopes for horses. Pisti, 80 Rue de Belleville is a wild ride through the passionate yet caustic escapades of a new, yet already exhausted left, plotting the ultimate revolutionary gesture. An utterly brilliant attack on the pieties of the liberal life-style. En route to cult classic.” —Anna Gritz, head curator, KW Institute for Contemporary Art, Berlin

“Fairy dusted in the narrative beliefs of a Chris Kraus-generation, Estelle Hoy’s Pisti takes flight to a place beyond the moon that all Baudelaire-loving revolutionary teens dreamed of: Paris(!)—or, a version of it clouded in cigarette smoke and loud complaints, where desire, dissociation, partial-psychosis, day-drinking, endless idling and ennui are all implied, because, quite simply, they’re chic as hell and come with the kind of cultural clout that’s bound to get you hella laid. Hoy’s is a Paris collaged of dreamy pleasures that meet their bathetic end in run-down flats and disappointing fucks. It's a Never-Never Land for the leftist cultural imaginary that refuses to let go of its dilettantish, devil-may-care love for discourse, radical action, and, bien sûr, rosé o’clock.” —Sabrina Tarasoff, art critic, Paris / Los Angeles

“If life and politics are humiliating, what then? Pisti’s characters debate this question, while Hoy pursues its formal counterpart: should a novel of the now be a play, a series of tightly curated scenes, or a character-driven exploration? The answer to both questions is yes, maybe, but, and…plus a tart rebuttal that to ask them is to already expose yourself as having surrendered your authenticity (at least, that is what Pisti will say to you, should you be lucky enough to sit on her floor).  Estelle Hoy’s genius novel-cum-petition is a precocious meditation, that needs to be read more than once.” —Prof. Dr. Anna Poletti, dept. of Languages, Literature and Communication, Utrecht University

Published by After 8 Books, 2020
Design by Victoire Le Bars (baby what you need?)
Literature 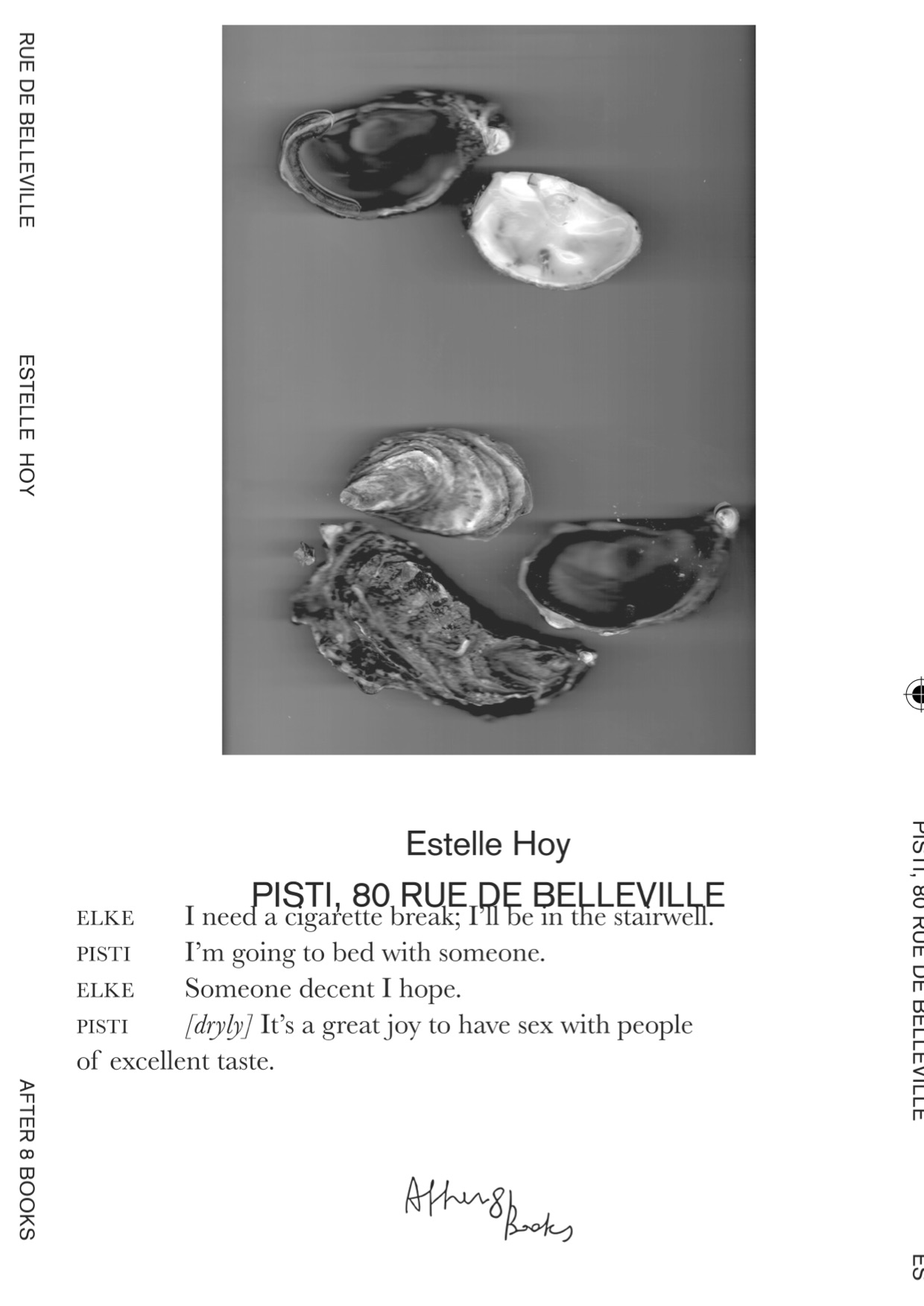