Faire is a bi-monthly magazine dedicated to graphic design, published from October to June, distributed each two months in the form of anthologies of three or four issues. Created by Empire, Syndicat studio's publishing house, Faire is aimed for undergraduate students as well as researchers and professionals, documenting contemporary and international practices of graphic design, along with the history and grammar of styles. Each issue focuses on a single subject, addressed by a renowned author.

#16 — A reproduction: what El Lissitzkzy wants. Author: James Langdon
I am rarely convinced when I see graphic design that was originally printed in two inks reproduced in four- colour process. Before the advent of commercial colour offset printing, the elementary colours of printing — from Gutenberg to Tschichold — were black and red. In the early twentieth century, black and red were used by graphic designers not to attempt to recreate the spectrum of colours that appear to the human eye, but as graphic forces in themselves. To make a distinction. To create dynamism. To embody ideology on the page. In particular, the combination of black and red on white paper has become synonymous with Suprematism and revolutionary Russian graphic design.

#17 — An acronym: ACAB. Authors: Ariane Bosshard, Jérôme Dupeyrat, Olivier Huz and Julie Martin
The acronym ACAB, often seen in urban space in the form of graffiti or stickers, first appeared in the U.K. in the 1970s, linked to punk culture, and later found a certain popularity during the social movements of the 1980s. Meaning “All Cops Are Bastards”, over the last 20 years it has become widespread in public spaces internationally, in the wake of a number of political movements, from alter-globalization groups to the French gilets jaunes, or Yellow Jackets, along with black blocks and TAZs, even spawning different variations, such as “All Capitalists Are Bastards”, “All Colors Are Beautiful” and “All Cats Are Beautiful”.

#18 — A studio visit: the studio of Ines Cox. Authors: Manon Bruet and Julia Andréone
Three women walk into a bar. The first lives in a large apartment in Anvers, Belgium. The second is an independent Graphic Designer who founded her own studio. The third is an avatar—you might even know her—with a certain interest in creative processes, their interfaces, and their vocabularies. Together, they eat some pistachio nuts, order vodka, and are not at all sure about getting up the next day to teach at the Royal Academy of Fine Arts. But together, more than anything else, they form the troubling multiple personality of Ines Cox, a Belgian Graphic Designer who met Julia Andréone and Manon Bruet in her studio in June 2019. An opportunity to develop a narrative driven by three voices and to trace the outline of a path, a practice, and a figure. 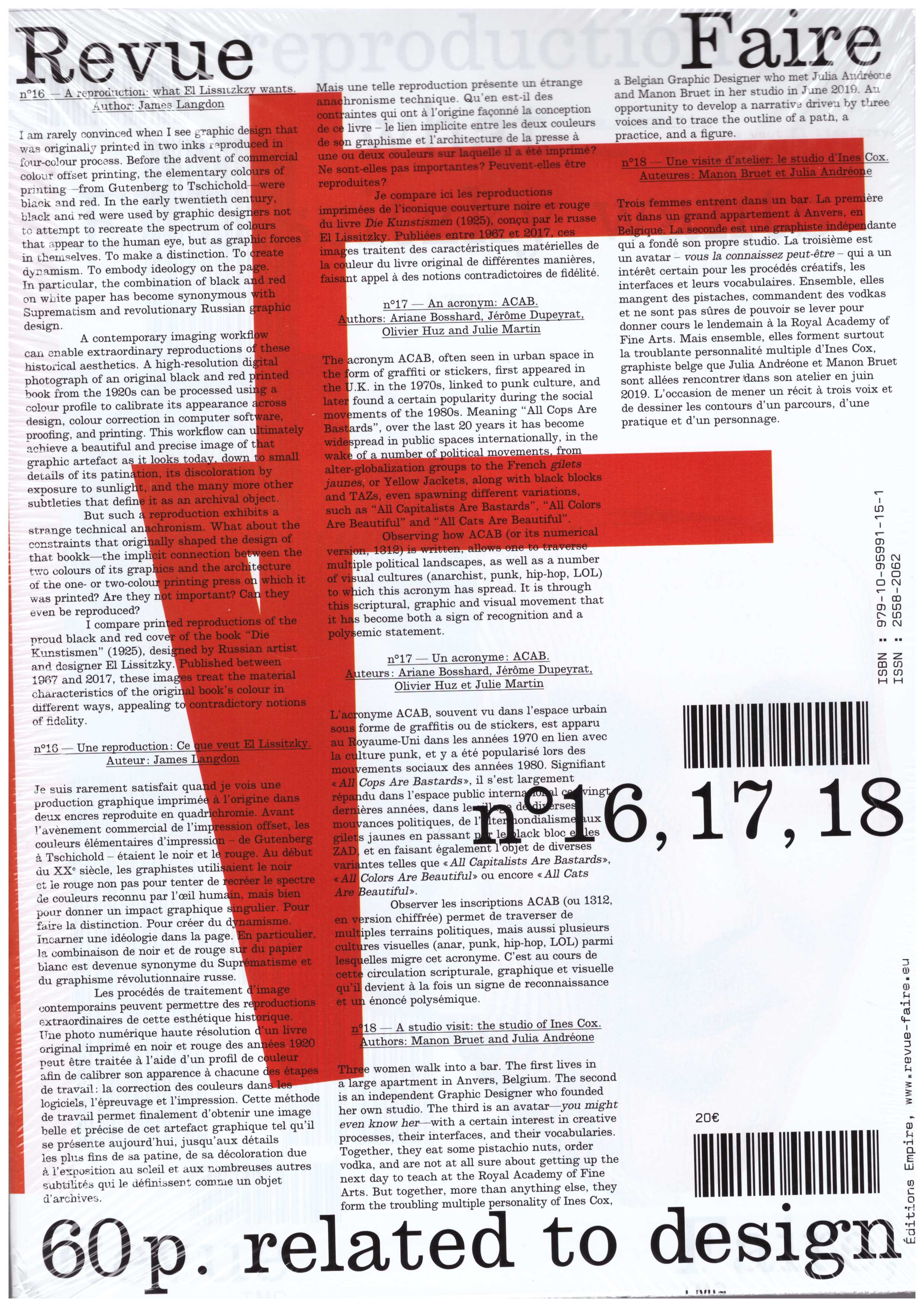